“This grand work of national regeneration...must now address itself, with full purpose that the work shall this time be thoroughly done.”
–Frederick Douglass

Monument Lab is excited to announce Re:Generation – a nationwide participatory public art and history project launching in Spring 2022. The goal: to elevate the next generation of monuments that reckons with and reimagines public memory. The project subgrants a total of $1 Million across ten local field offices led by collaborative teams of artists, educators, storytellers, and organizers; each working on a commemorative campaign rooted in the living history of a neighborhood, city, or region. Monument Lab’s Re:Generation opens across the country from May Day–Labor Day 2022. Re:Generation is supported by The Andrew W. Mellon Foundation’s Monuments Project.

The Re:Generation field office teams hail from across the varied geographies of the United States, including major cities, rural regions, tribal communities, borderlands and U.S. territories. The participants were selected through a far-reaching open call conducted earlier in 2021, which brought in hundreds of applications from every state, most territories, and numerous tribal communities. Potential project teams proposed new and existing public-facing art installations, community-based research and education, and social justice initiatives, and, notably, emphasized the potential to shift local and regional narratives, particularly in contexts where interventions into the commemorative landscape could foster wider transformations. Applications were reviewed by Monument Lab and a jury of external curators, artists, educators, and collaborators.

The announcement of the ten selected teams and projects offers a roadmap for a project focused on the future of public memory in this country. Re:Generation calls for expanded platforms and models of commemoration, acknowledgment, justice, and belonging. The cohort of teams’ projects is part of a much larger and still growing community of memory workers who explores how history lives with us everyday to celebrate commemoration by elevating stories embedded within communities that foster repair and healing. 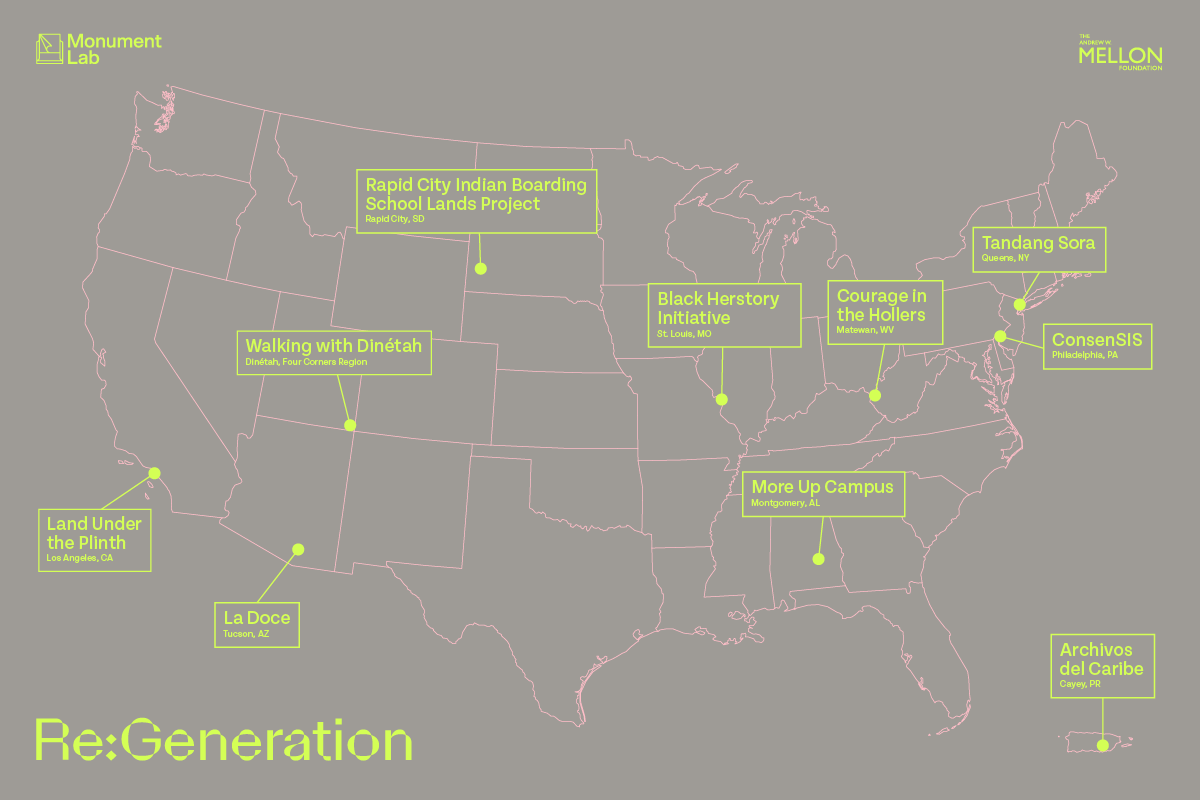 Each selected Re:Generation team will receive a total of $100,000 toward its local commemorative campaign and is part of the nationwide project that invites and challenges us to re-envision monuments of the past, present, and future together.

More about the Re:Generation teams

In a city that both claims status as the “Cradle of the Confederacy” and “Birthplace of the Civil Rights Movement,” the More Up Campus: The Mothers Of Gynecology Monument will create a holistic space where art, history, and health come together and conversations take place around the legacy of slavery, Black women’s maternal health, and reproductive justice.
Team members include: Michelle Browder, Deleso Alford, Stephen Browder, J.C. Hallman, and Geneva Watford.

To contest gentrification in a major urban center within the U.S.-Mexico borderlands, La Doce envisions flipping notions of who gets honored with monuments from heroic mythical figures to local residents through the creation of “altars to barrio workers” and “sites of memory and resiliency” for a new blueprint of recognition.
Team members include: Imelda G. Cortez, Lane Santa Cruz, and Carlos Valenzuela.

The Land Under the Plinth will recover the spaces on which monuments to colonial figures once stood and dedicate an emergent place for engagement with the Tongva community and City of Los Angeles, including a learning center, research opportunities, and new markers to uplift visions for how L.A.’s First Peoples want to project themselves into the future of this metropolis.
Team members include: Joel Garcia, Mercedes Dorame, River Garza, Kimberly Morales-Johnson, and Samantha Morales-Johnson.

Tandang Sora spotlights the stories and lineage of care labor and immigration in Queens, the most ethnically diverse urban area in the world. The work is inspired by the legacy of Filipina revolutionary Tandang Sora and will serve as a monument to transnational care workers in the diaspora located in the heart of the New York City Filipino community.
Team members include: Jaclyn Reyes and Xenia Diente.

ConsenSIS summons “sisterly history” to preserve the past and present literary legacy of Black women poets in Philadelphia. By gathering stories through a survey, hosting a reunion, and prototyping historic markers, the project aims to spark new traditions that commemorate a vital creative community in a city where Black women’s contributions to history are often buried under cobblestones and colonial landmarks.
Team members include: Yolanda Wisher and Trapeta B. Mayson.

In the heart of central Appalachian coalfields, Courage in the Hollers: Mapping the Miners’ Struggle for a Union will commemorate the history of labor organizing by memorializing the Battle of Blair Mountain and celebrate the collective efforts of a multiethnic, multiracial working class who stood up against oppression 100 years ago in the rural landscape where it took place.
Team members include: Mackenzie New Walker, Erin Bates, Mike Johnson, Brian Lacy, Shaun Slifer, Bobby Starnes, Terry Steele, and Kyle Warmack.