Staying Power – Ebony G. Patterson, She Is
The Village of Arts and Humanities, Philadelphia, PA
May 2021—July 2021 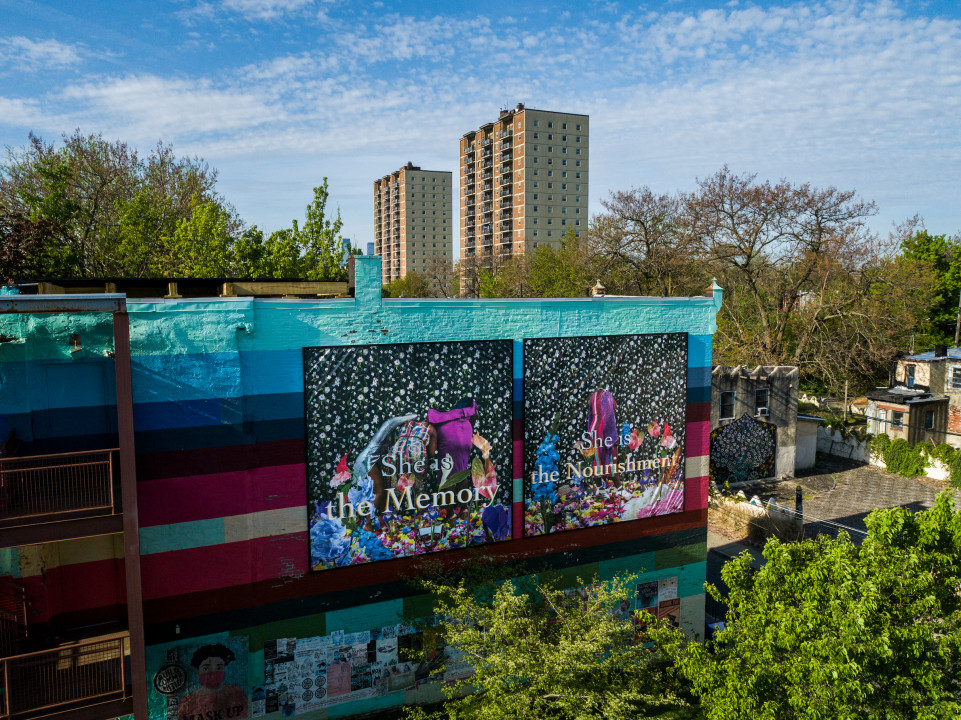 She Is…
Digital photographs on vinyl and aluminum frames

Ebony G. Patterson creates imaginative and multilayered installations, paintings, sculptures, and scenes that channel beauty as tools for reflection and resistance. Her projects weave together narratives of life and loss while commanding attention through spectacular displays of rich textures, hand-crafted details, and bright colors that bear witness to the social forces of violence and injustice. For Staying Power, Patterson sought to honor “the labor of women in relation to the wailing and the land.” After a virtual site visit in Summer 2020 that included conversations with neighborhood collaborators, Patterson proposed a vision for She Is…, a series of large-scale works that could adorn the facades and walls of buildings throughout the Village’s campus parks, each with a call to the under-acknowledged labor of women in this neighborhood and others, especially in acts of care, protest, and mourning. Each of the four scenes created by the artist includes headless, monumental figures embedded in dreamlike and embellished gardens, punctuated with a poetic phrase and call to acknowledgment: “She is the memory,” “She is the nourishment,” “She is the soil,” and “She is the mourning.” As Patterson adds, “Here we come to pay homage but to also acknowledge the continued labor in response to violence, but through this labor these women also enact promise.”

I have been thinking about the labor of women in relation to the wailing and the land. I have been thinking about the labor of Black women in working-class communities and their centrality. What does it mean to think of the communal space as liminal, as domestic extensions or to think of the land as feminine. A site from which we came, where we nourish, and where we return. With an ongoing interest in exploring the ways disenfranchised peoples use language, the metaphor of dress and the garden as a tool and site of power, beauty, mourning, burial, renewal, protest, and dignity.

In thinking about​ Staying Power,​ I am particularly interested in creating four monumental photo banners that acknowledge the role and labor of women in the acts of mourning. Our entry into the world is signaled by the wailing of a woman and our exit is signaled through a wailing again. Both entry and exit function as warnings to the world. Through this work I seek to create large-scale vinyl banners that will cover the façade of buildings. In each of these images we bare/bear witness to women nestled in a garden space. Across these images sit declarations and the anchoring of women’s bodies, in the act of labor in the mourning of violence, and the labor of renewal.

In making these images at this scale, I am also hoping to collapse the façade of the building and open a field of witnessing and honoring these women at their feet. Here we come to pay homage but to also acknowledge the continued labor in response to violence, but through this labor these women also enact promise.

Images courtesy of the artist and Monique Meloche Gallery