Staying Power – Courtney Bowles and Mark Strandquist, On the Day They Come Home
The Village of Arts and Humanities, Philadelphia, PA
May 2021—July 2021 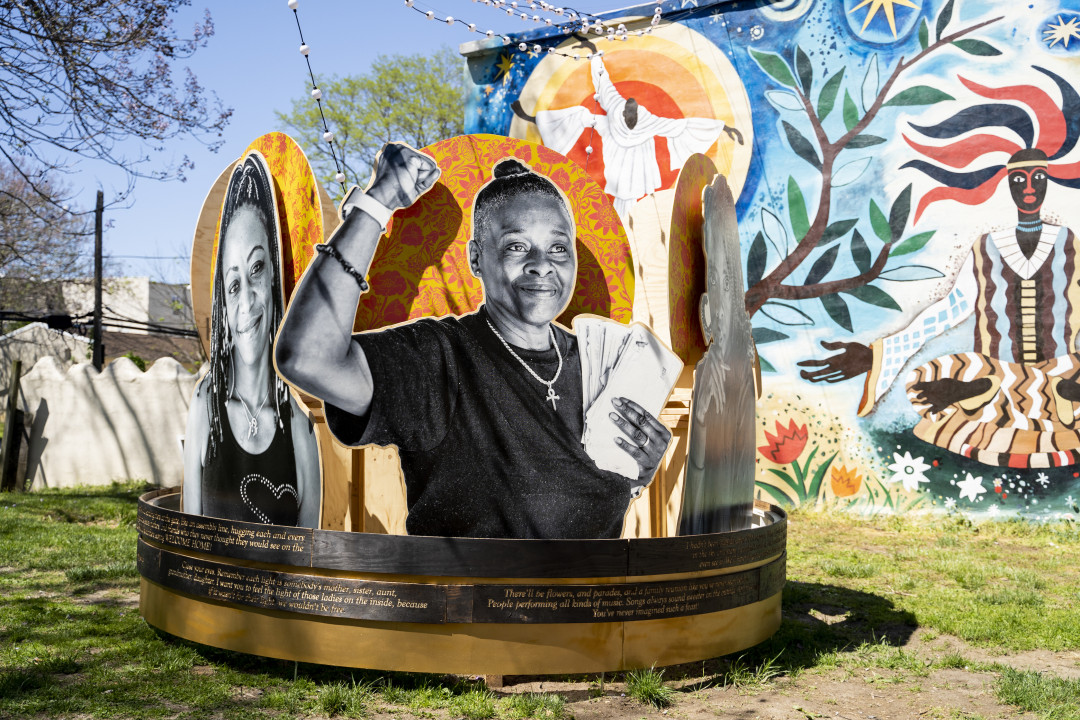 As artists and cultural organizers, Courtney Bowles and Mark Strandquist produce meaningful public projects through creative coalitions that seek remedy against and alternatives to the injustices of mass incarceration. Over the last seven years, Bowles and Strandquist have co-directed the People’s Paper Co-Op, an initiative of the Village of Arts and Humanities, which works with women in reentry to fight to free and support incarcerated mothers and caregivers. For Staying Power, Bowles and Strandquist responded to the exhibition’s central prompt by seeking out those missing from the neighborhood, with close attention to women serving long-term and life sentences, asking further, “Who has been displaced? Who is fighting to help them return?” For this project, Bowles and Strandquist collaborated with five women—Tamika Bell, Paulette Carrington, Starr Granger, Ivy Lenore Johnson, and Yvonne Newkirk—whose lives were, or continue to be, ensnared by long-term and life sentencing. They imagined a prototype monument/memorial that “highlights the struggles of the present, while imagining the day when all women serving life are set free.” The crown-shaped wooden sculpture features monumental portraits produced with their collaborators, encircled by etched poems and fragments of text in which they recall or imagine liberatory days of release. One portrait included in the sculpture is held as a silhouette to acknowledge the names of women, mentors, and sisters who passed away before their life sentences were commuted.

Their sculpture is accompanied by a number of layered features that seek to animate their research and collaborative process including QR codes that activate audio interviews recorded with their collaborators. Hovering above the portraits, two hundred lights pulse in different color formations to visualize data about women serving life in Philadelphia and Pennsylvania. For audio recordings and more information related to On the Day They Come Home, visit peoplespaperco-op.com/till-they-come-home.

Artist Statement
“I would love to see it like a parade and everybody is real colorful, you know, bright and smiles. We’re clapping and hugging, and then we see them coming towards the gate, but they're not walking. They're running. They're so happy they're running out, screaming, “We finally made it!”
—Paulette Carrington, collaborating artist

When we consider the idea of staying power, we first ask, who is missing? Who has been displaced? Who is fighting to help them return?

In North Philadelphia, the extreme of displacement is being permanently removed through life imprisonment. There are two hundred women serving life in Pennsylvania. Fifty-four of them are from Philadelphia.

On the Day They Come Home is both a monument and a memorial. As a monument, the installation celebrates the resiliency and power of former long-term and life-sentenced women, and those with impacted family members, through larger-than-life portraits, poetry carved out of charred wood, and interactive audio portals that amplify the stories behind the sculpture. Around each woman’s portrait is a wreath of flowers that symbolize a core tenet of the abolitionist world the women advocate for: healing, resistance, resiliency, counter-narratives, and love.

As a memorial, the installation makes those currently sentenced to life in Pennsylvania undeniably visible (through the hundreds of animated lights suspended above the sculpture), while commemorating the lives and activism of life-sentenced women who died before gaining their freedom.

The installation highlights the struggles of the present, while imagining the day when all women serving life are set free. As a structure, the installation inverts the image of a prison chain gang by creating a circular and unified formation that hints at a crown to celebrate their power, and a stage to celebrate the future for which these women are fighting.
–Courtney Bowles and Mark Strandquist

Light Installation — Context
“The lights illuminate, they move, they enchant.
They tell a story. Just like those ladies on the inside.

I want you to feel the light of those ladies on the inside,
because if it wasn't for their light, we wouldn't be free.”
—Excerpt from On the Day They Come Home

There are 200 women are serving life in prison:

Artist Bios
Courtney Bowles and Mark Strandquist have spent years using art to amplify, celebrate, and power social justice movements. The media campaigns and immersive exhibitions they lead have helped advocates close a prison, pass laws, raise over $125,000 to free people in jail, and connect the dreams and demands of communities impacted by the criminal justice system with tens of thousands of people. They have received multiple awards, fellowships, and national residencies, and have reached wide audiences through the New York Times, Guardian, Washington Post, NPR, PBS NewsHour, and VICE. They currently co-direct the People’s Paper Co-op in Philadelphia, at the Village of Arts and Humanities; and, building on a fellowship from A Blade of Grass and Open Societies Foundation, they began the Reentry Think Tank. Strandquist founded and co-directs Performing Statistics in Richmond, and the COVID-19 rapid response project Fill the Walls with Hope, Rage, Resources, and Dreams.