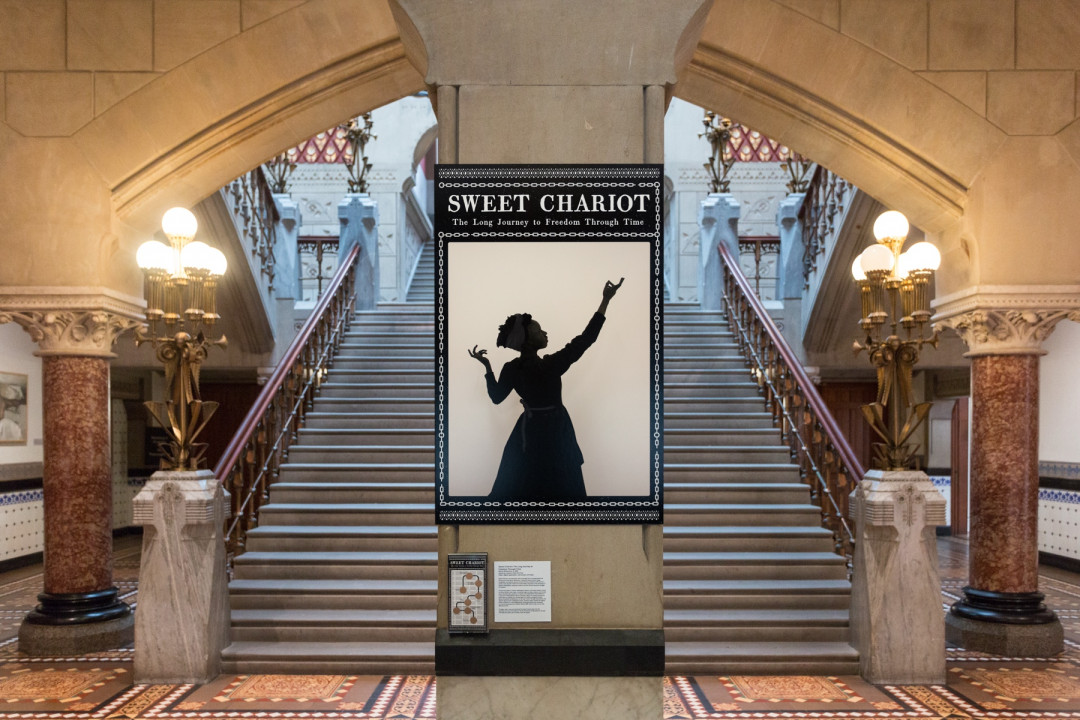 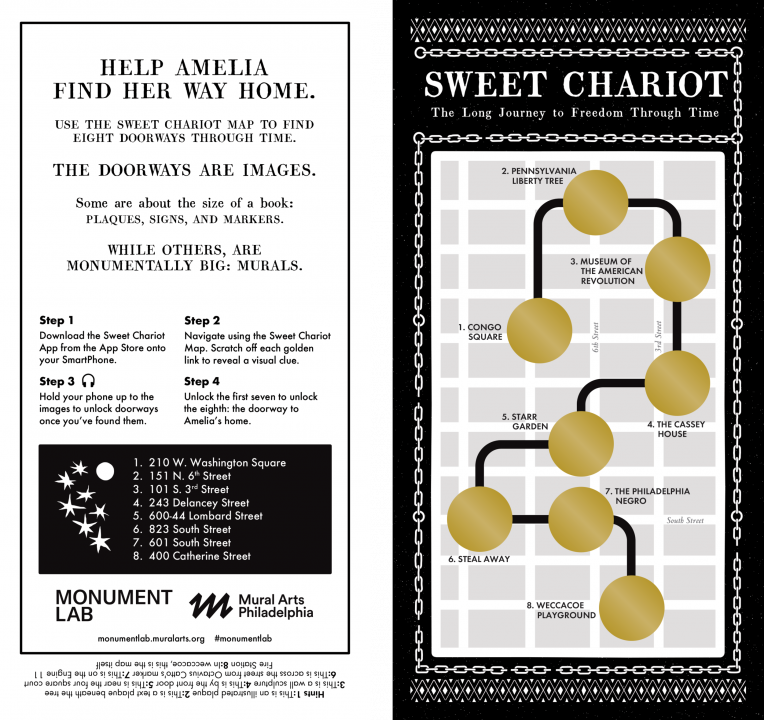 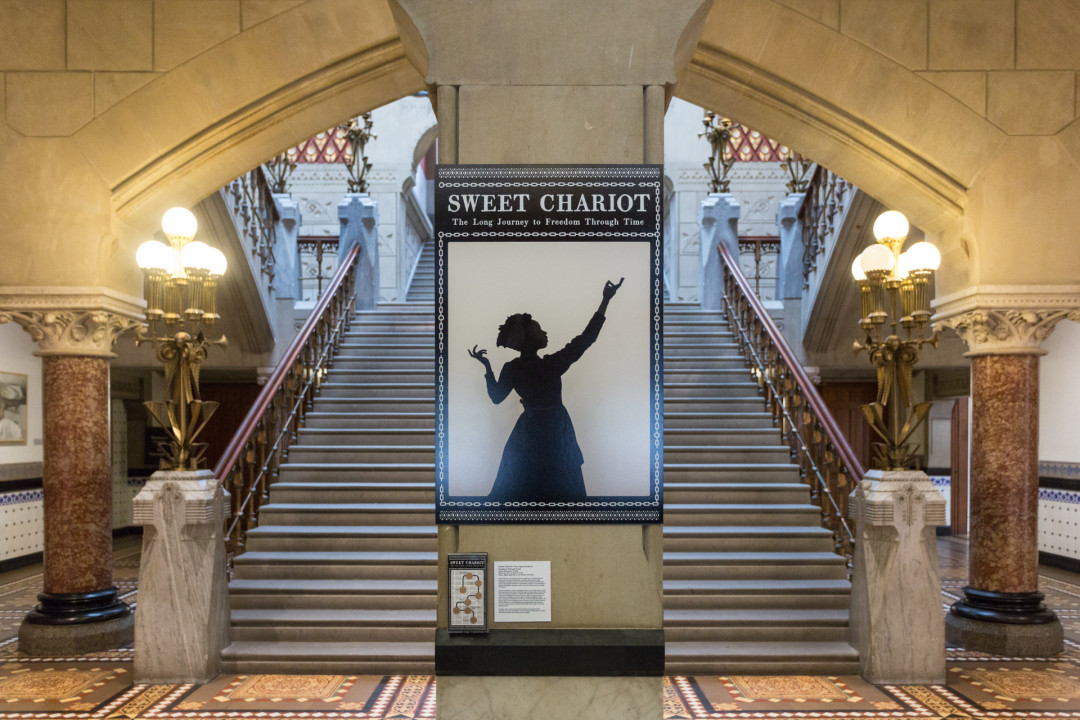 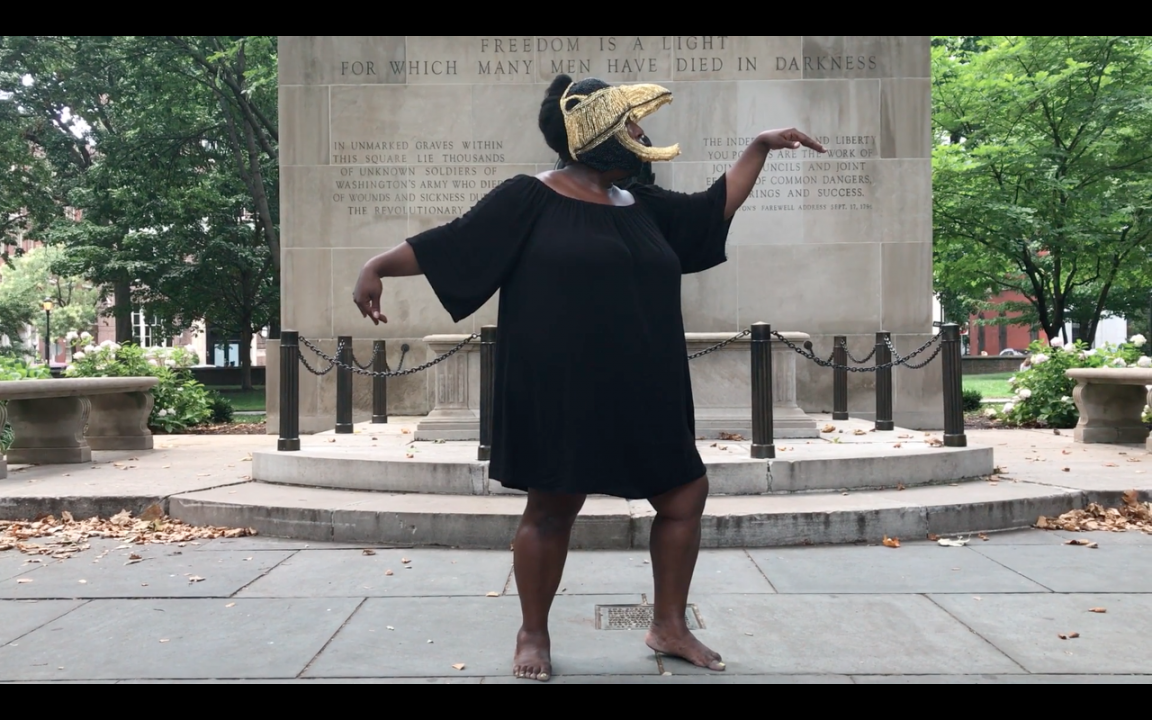 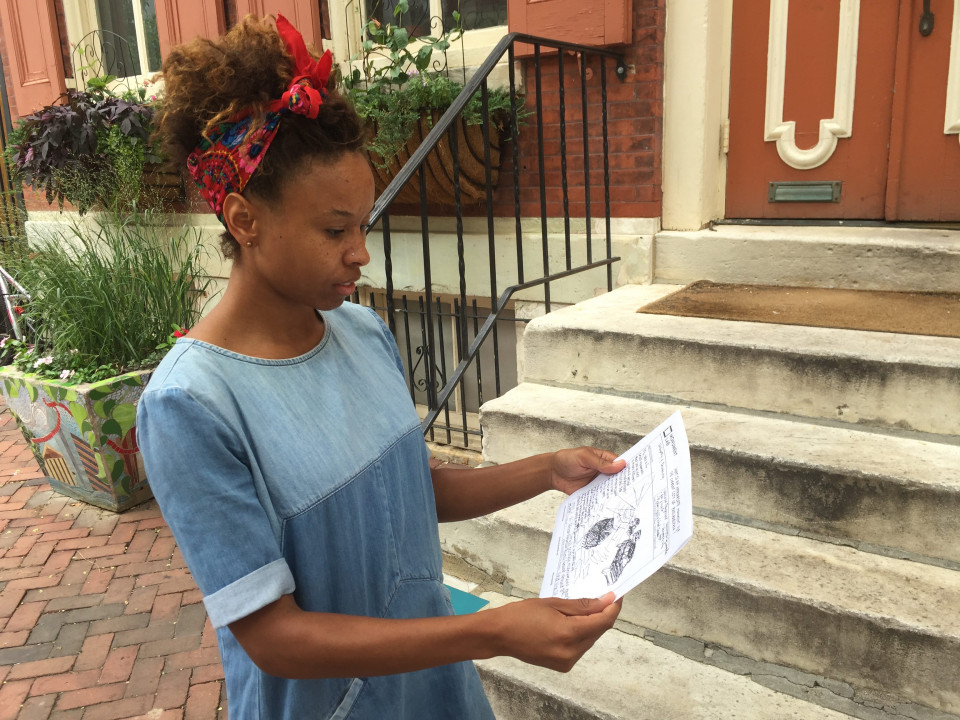 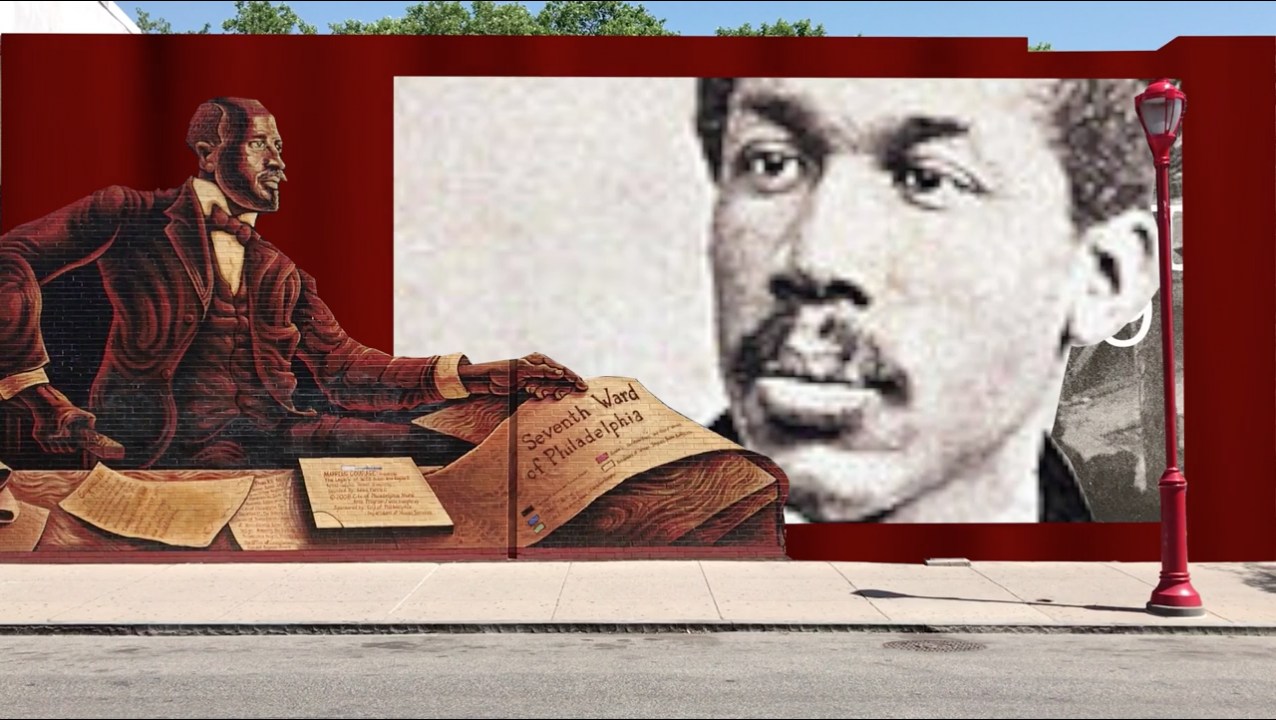 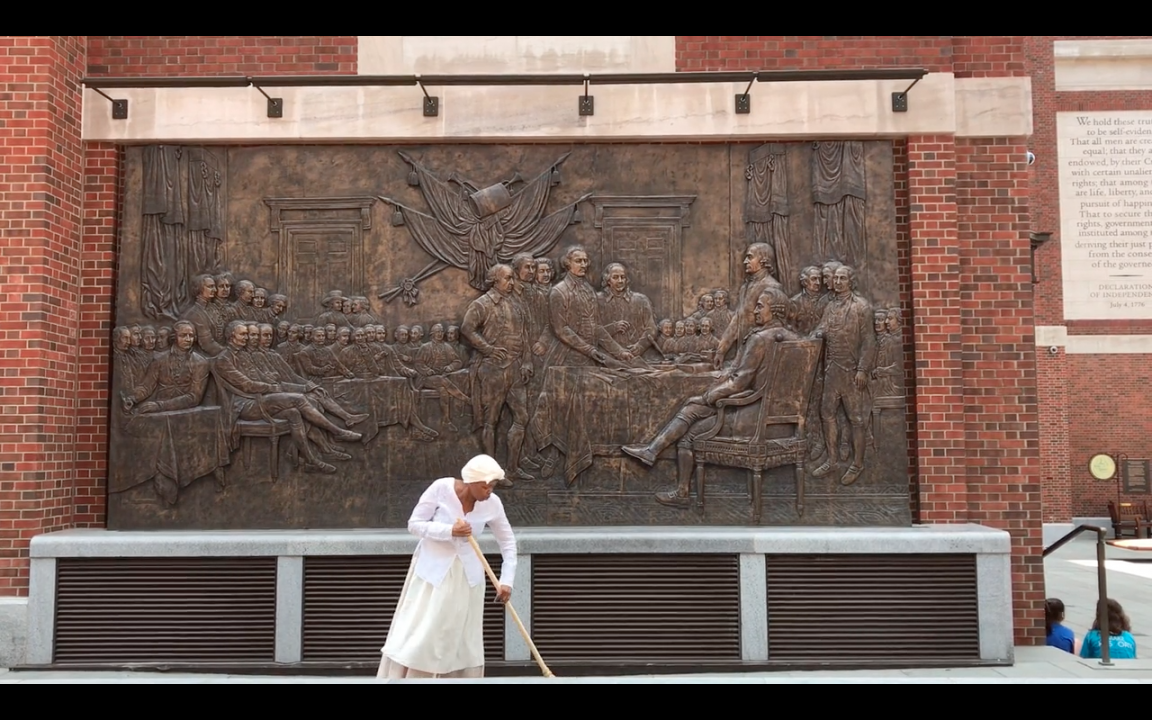 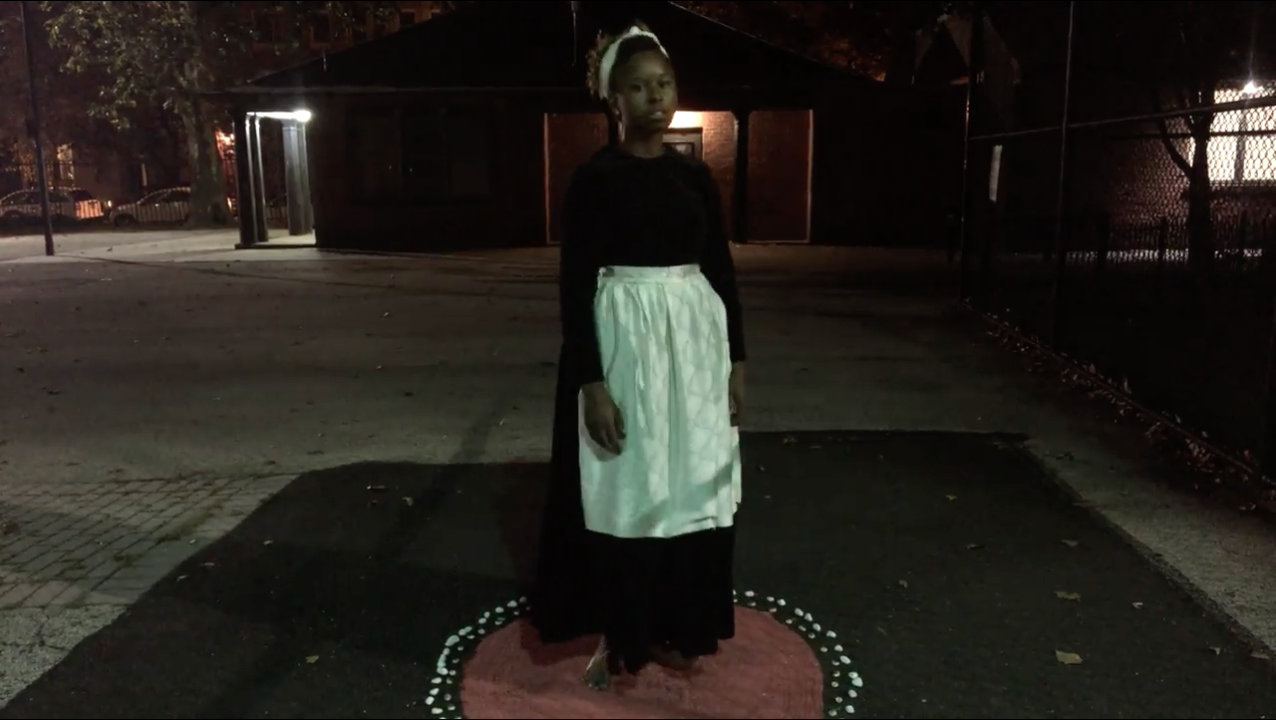 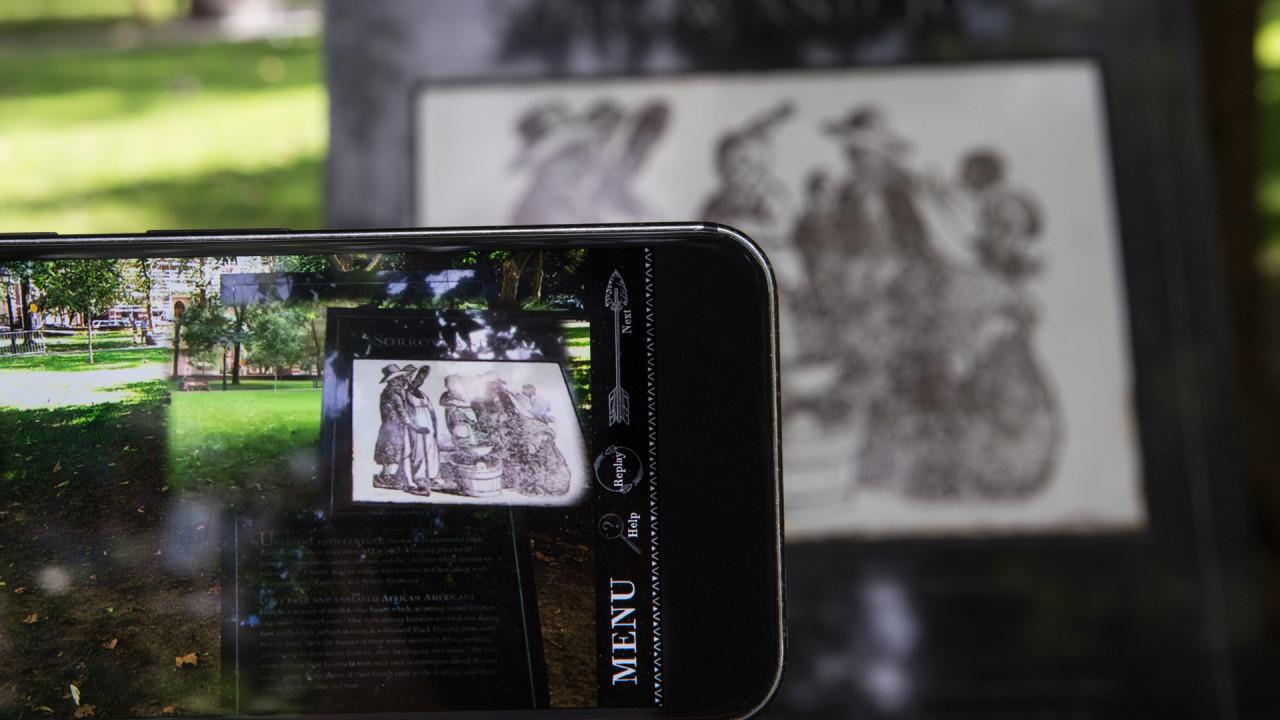 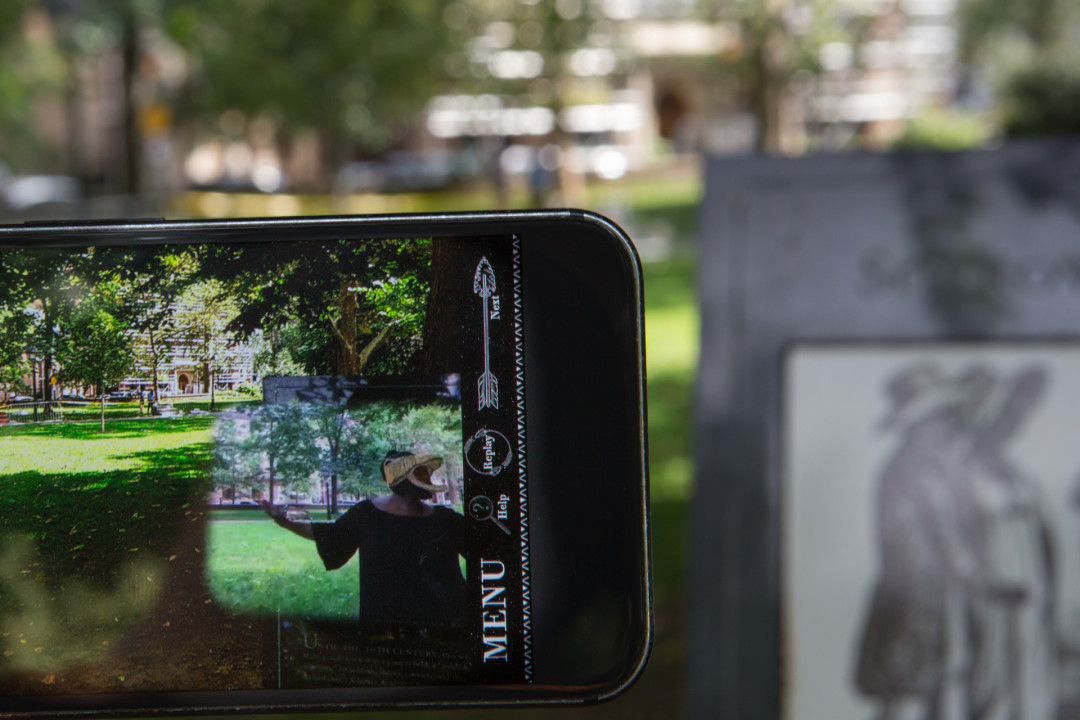 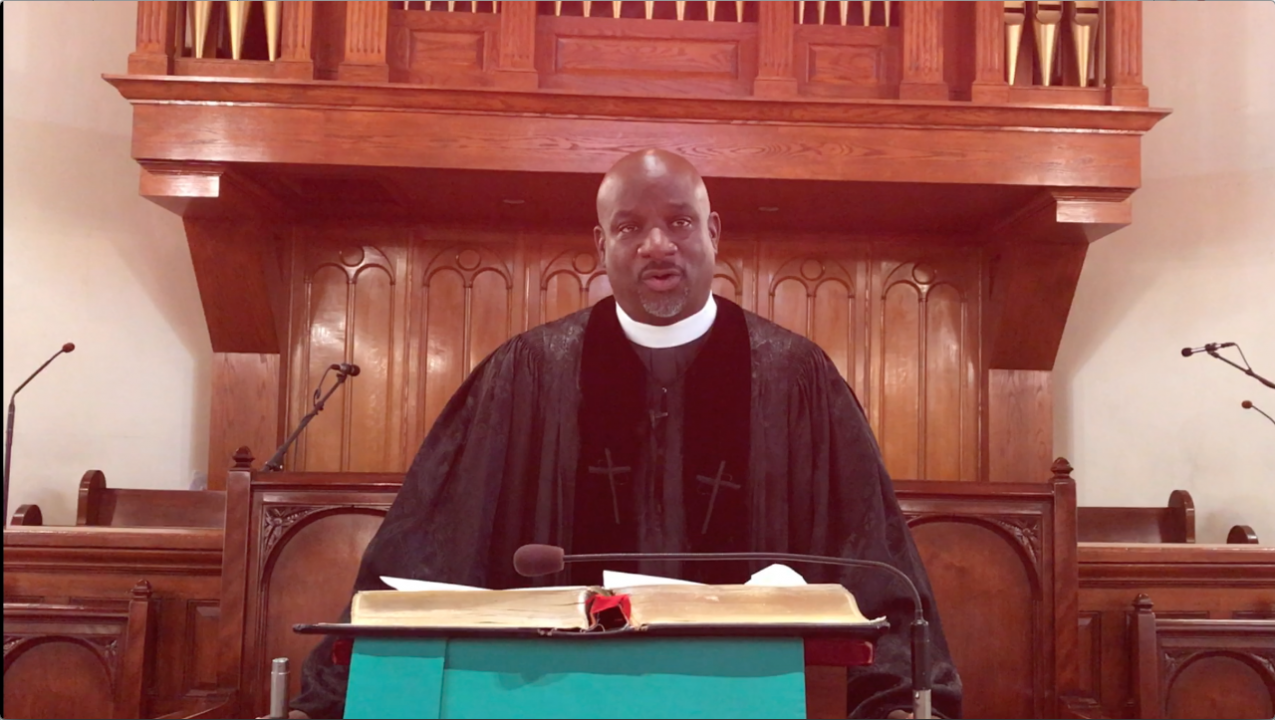 Sweet Chariot was an interactive video scavenger hunt, conceptualized and directed by Philadelphia-born artist Marisa Williamson. For her work, Williamson developed a Sweet Chariot image-recognition smartphone app and scratch-off map, in which participants could unlock a series of site-specific videos that revealed hidden moments in the landscape of historic Philadelphia, opening a window onto the African American struggle for freedom. The journey began in Washington Square, and invited viewers to look for clues hiding in plain sight, prompted by images on signs, plaques, and murals. Each unlocked video presented a creative and collaborative interpretation of a story from Philadelphia’s rich African American history. As viewers experienced each video on location, the ultimate goal was to follow protagonist Amelia Brown (embodied by Williamson) on her way “home” through interactions with historical figures such as Margaret Forten, Octavius Catto, and W.E.B. Du Bois. Brown’s character was based on a real Philadelphian whose gravestone was excavated in a former burial ground for Mother Bethel African Methodist Episcopal Church, under current-day Weccacoe Park in South Philadelphia’s Queen Village neighborhood. During the exhibition, Sweet Chariot’s scratch-off map was available at the Washington Square Lab and at the Exhibition Hub at the Pennsylvania Academy of the Fine Arts. The map is currently available at Philadelphia’s American African Museum.

Marisa Williamson was recognized with a 2018 Young Friends of the Preservation Alliance Award for her Monument Lab installation.

The “negro spiritual” called “Swing Low, Sweet Chariot” describes a metaphysical vehicle passing low overhead to transport the singer home. Part of the coded language of American spirituality, the song is both warm and haunting; a reminder of the finite nature of life, the long path to freedom, the meandering journey home, and the value of exploration—through the transcendent power of imagination and storytelling.

I set out to make a ghost story. I wanted a story to creep up from behind and blow gently on your neck. And when you turned, I wanted it to flicker off—making you wonder whether you had only imagined it. Sweet Chariot is that ghost story. The guide, Amelia, is borrowed from the past. As with my previous work, I wanted to inhabit a character who could shepherd audiences through doorways, down side streets, in and out of institutions, over centuries, and out of the secret passageways of past, hidden all around us, in plain sight, in the present.

Sweet Chariot is an interactive video scavenger hunt, conceptualized and directed by artist Marisa Williamson. Using the image-recognition smartphone app, Sweet Chariot, and the Sweet Chariot scratch-off paper map, audiences will uncover a series of site-specific videos that reveal hidden moments in the landscape of historic Philadelphia—moments that open a window onto the African American struggle for freedom. Each video presents a creative, collaborative, musical, poetic, and/or performative interpretation of a story from Philadelphia's African American history of protest, perseverance, leadership, and creativity. Featured stories include those of Bethel Burial Ground, Octavius Catto, W.E.B Dubois, and Congo Square.