Conversation: A Memorial to the Pandemic hosted by the Institute for Religion, Culture, and Public Life 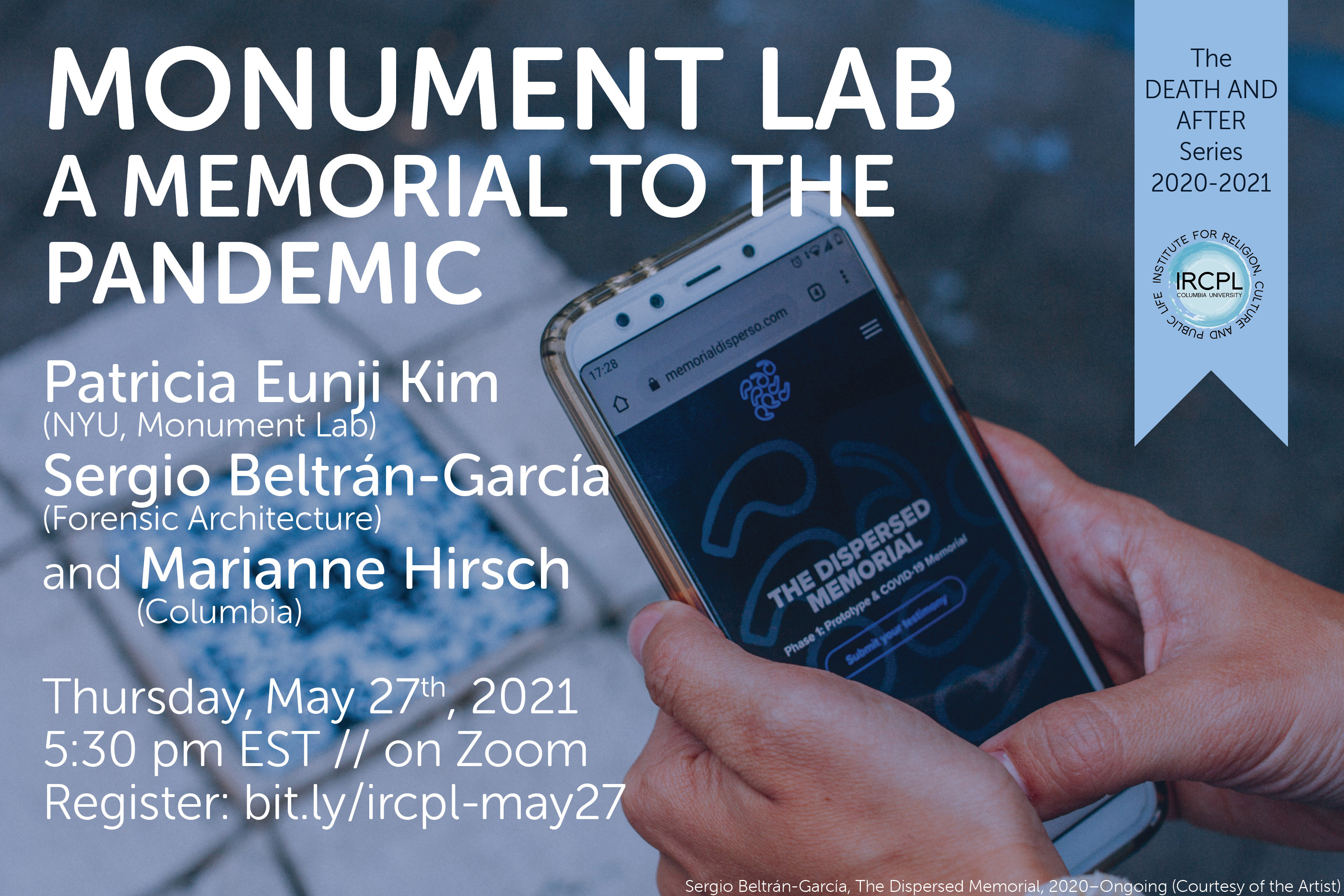 The COVID-19 pandemic continues to ravage lives and livelihoods (especially of the most precarious, underserved communities) across the world. Traditional modes of mourning and commemoration are dangerous and ill-advised. How then, might communities and individuals grieve their losses? In this conversation, Sergio Beltrán-García (artist and activist) and Patricia Eunji Kim (art historian and curator) discuss the memorials, strategies, and stakes of commemorating the pandemic. If we dare to memorialize the pandemic dead, we must commit to unveiling the systemic inequities that left them so exposed. In other words, a memorial to the pandemic must also confront the very issues of labor, race, gender, and access that both created and exacerbated the conditions of vulnerability.

Sergio Beltrán-García is an architect, activist and researcher whose work focuses on the role of memory in the aesthetic and political practices of transitional justice. He has accompanied the production of memorial processes in cases of human rights violations such as the forced disappearance of peasants during the Mexican counterinsurgency, the fatal police raid at the New’s Divine dance club, and the 2017 Mexico City earthquakes. His current research interests examine the abuse of memory as an extension of state violence. In 2019 the UK government awarded him the Chevening Award, with which he completed a Master of Arts at Goldsmiths, University of London, and he currently researches within the prestigious Forensic Architecture agency. He is a member of the Association of Memory Studies and has received scholarships from the Aspen Institute and Bloomberg Philanthropies.

Patricia Eunji Kim, PhD, is an art historian, curator, and educator based in New York City. She is Assistant Professor and Faculty Fellow at the Gallatin School of Individualized Study at New York University and Associate Director of Public Programs at Monument Lab and Editor of the Monument Lab Bulletin. Kim’s research, teaching, and curatorial projects use art historical and archaeological methods to explore questions of gender, power, and memory from antiquity to the present.  She is currently writing Bodies of Power: The Art and Archaeology of Royal Women from the Hellenistic World (4th-1st c BCE), the first book-length study on the visual and material culture of ancient queenship engaging with discourses in critical race, feminism, and cultural heritage studies. Kim is co-editor of Timescales: Thinking Across Ecological Temporalities (University of Minnesota Press, 2021), and is currently co-editing Shaping the Past (Bundeszentrale für politische Bildung, under contract), which features artists, curators, and activists who critically reimagine monuments across the globe. Her work has also been featured in ART PAPERS, Caldera Magazine, and Newsworks.

Marianne Hirsch is William Peterfield Trent Professor of English and Comparative Literature and Professor in the Institute or Research on Women and Gender at Columbia University, as well as former President of the Modern Language Association of America. She has worked extensively on the second-generation memory of the Holocaust and has written several books on family narratives in literature and photography. Her most recent books are Imagining Everyday Life: Encounters with Vernacular Photography; School Photos in Liquid Time: Reframing Difference (with Leo Spitzer); The Generation of Postmemory, Ghosts of Home: The Afterlife of Czernowitz in Jewish Memory (with Leo Spitzer); and Women Mobilizing Memory (co-edited with Ayşe Gül Altınay, María José Contreras, Jean Howard, Banu Karaca, and Alisa Solomon).