Art, Activism, and Democracy: A Conversation with Salamishah Tillet and Paul Farber 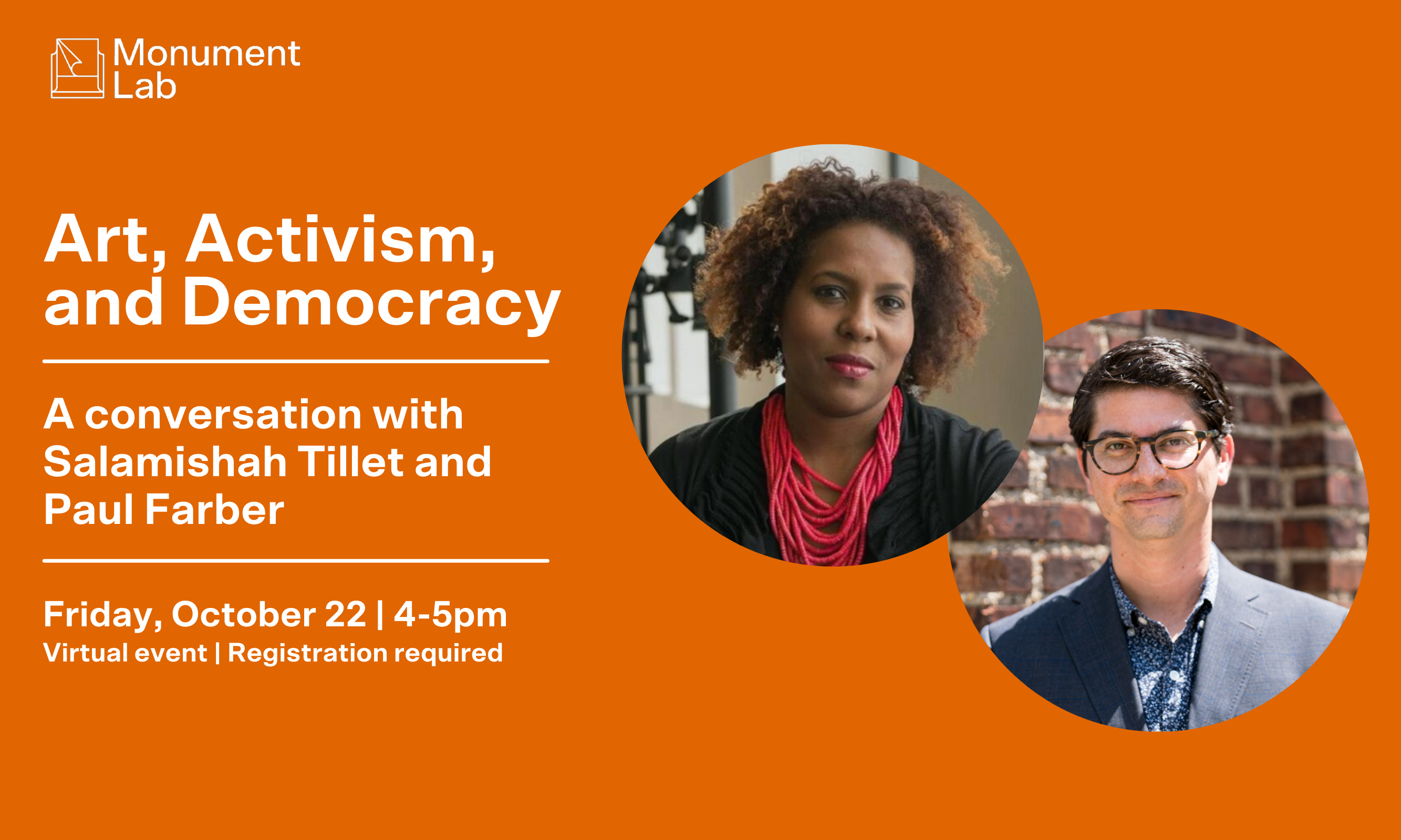 As part of our in-person Fall Gathering, we are thrilled to present our virtual pre-event program: Art, Activism, and Democracy: A Conversation with Salamishah Tillet and Paul Farber.

Co-presented with the Center for Public Art and Space at the University of Pennsylvania Weitzman School of Design.

Registration is required for this virtual offering.

Salamishah Tillet (she/her) is the Henry Rutgers Professor of African American Studies and Creative Writing and the Director of Express Newark, a center for socially engaged art and design, at Rutgers University-Newark. She is a contributing critic-at-large for the New York Times, and the author of Sites of Slavery: Citizenship and Racial Democracy in the Post-Civil Rights Imagination and the recent book, In Search of The Color Purple: The Story of An American Masterpiece. She is currently working on a book on the civil rights icon, Nina Simone for which she received the Whiting Foundation Creative Non-Fiction grant in 2020, and the cultural history of the Me Too movement for which she was awarded the Andrew Carnegie Fellowship in 2021. In 2003, she and Scheherazade Tillet founded A Long Walk Home, an organization that uses art to empower people to end violence against girls and women.

Paul M. Farber (he or they) is Director and Co-Founder of Monument Lab. He also serves as Senior Research Scholar at the Center for Public Art & Space at the University of Pennsylvania. This academic year (2021-2022) he is the William Wilson Corcoran Visiting Professor of Community Engagement at the George Washington University.

Farber and the team at Monument Lab were the inaugural grantees of the Andrew W. Mellon Foundation’s “Monuments Project,” a $250 Million initiative to “transform the way our country’s histories are told in public spaces,” including Monument Lab’s National Monument Audit and the opening of research field offices throughout the United States. Farber has co-curated Monument Lab projects including its original Philadelphia City Hall discovery exhibition (Philadelphia, 2015), citywide public art and history exhibition (Philadelphia, 2017), A Call to Peace (Military Park Newark, 2019), Public Iconographies (Pulitzer Foundation, 2019-2020), and Staying Power (Village of Arts and Humanities, 2021).

Farber's research and curatorial projects explore transnational urban history, cultural memory, and creative approaches to civic engagement. He is author of A Wall of Our Own: An American History of the Berlin Wall (University of North Carolina Press, 2020) which tells the untold story of a group of American artists and writers (Leonard Freed, Angela Davis, Shinkichi Tajiri, and Audre Lorde) who found refuge along the Berlin Wall and in Cold War Germany in order to confront political divisions back home in the United States. He is also co-editor with Ken Lum of Monument Lab: Creative Speculations for Philadelphia (Temple University Press, 2019), a public art and history handbook designed to generate new critical ways of thinking about and building monuments.

In addition to his work with Monument Lab, Farber served as curator for the inaugural Artist-in-Residence Program at the Office of the District Attorney of Philadelphia (2020), keynote speaker for the Americans for the Arts national conference (2020), and Scholar in Residence at Mural Arts Philadelphia (2015–2017). He serves as an advisor to numerous monument and memorial projects including for the City of Newark and the Emmett Till Interpretive Center.

Farber has edited and contributed to numerous art and history publications. He edited a new critical edition of photographer Leonard Freed’s Made in Germany (Steidl Verlag, 2013), co-edited a special issue of the journal Criticism on HBO's series, The Wire (Wayne State University Press, 2011), and contributed essays and advised the production of numerous visual culture books including Leonard Freed's This Is the Day: The March on Washington (Getty Publications, 2013), Nathan Benn's Kodachrome Memory: American Pictures 1972-1990 (powerHouse, 2013), and Jamel Shabazz's Pieces of a Man (ArtVoices, 2016). He has been invited to lecture and lead workshops for the Library of Congress, New York Public Library, and the Philadelphia Museum of Art. His work on culture has also previously appeared in The Guardian, Brooklyn Rail, Al Jazeera, Museums & Social Issues, Diplomatic History, Art & the Public Sphere, Vibe, and on NPR.